HISTORY OF TREATMENTSAlthough the awareness of local mineral springs dates back to the mid-15th century, their use for medical purposes was started in the mid-19th century. The real development of spa occurred after 1862, when mineral springs were recognized as healing. 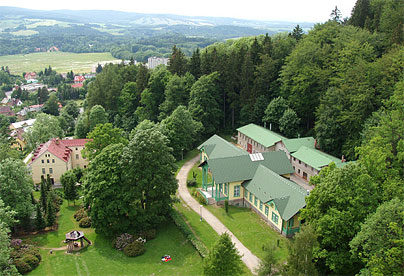 Why to choose the Spa of Kynzvart?

The long-term study "The Effect of Spa Treatment in Children" showed clear positive results - after the (repeated) treatment at Spa Kynzvart, the health status and quality of life improved in 75-78% of children.

Prince Richard Metternich built in 1863 the first spa hotel "Metternich" (today's Orlik spa house) and as the number of visitors of the spa increased, other hotels gradually grew. In 1908, the town received the official name "Spa Kynzvart".

From the establishment of the spa until World War II, the spa facility in Kynzvart was visited by rich clientele, including a number of leading world personalities of political and business life. The development of the spa was stopped by the Second World War. The spa hotels became a hospital and were used for treating the wounded German soldiers.

After the war, the development of spa was continued - but already in the ownership of state. The year 1950 has become an important milestone in the history of the spa by treating children instead of adult patients. At the time of the black cough epidemic, the local climate was confirmed as very favorable for the treatment of this severe illness. Over the next ten years, the indications were extended to all non-tuberculous lung and air passages diseases. The effectiveness of the local climate was confirmed, as in 97% of asthmatics dyspnea disappeared during the treatment, and long-term treatment effects were very favorable. When it was found that asthma treatment markedly improved even with the associated eczema, it was decided to extend the indication of eczema and other chronic childhood skin diseases.

The spa facilities became part of the State Spa Marienbad. With effect from January 1, 1992, the children's hospital became an independent and a state contributory organization called Children's Spa Hospital Kynzvart, whose establisher is Ministry of Health of the Czech Republic. With effect from September 2013, based on the approval of the new indication list, the treatment was extended to the treatment of adult patients and the organization was renamed to Healing Spa Kynzvart.